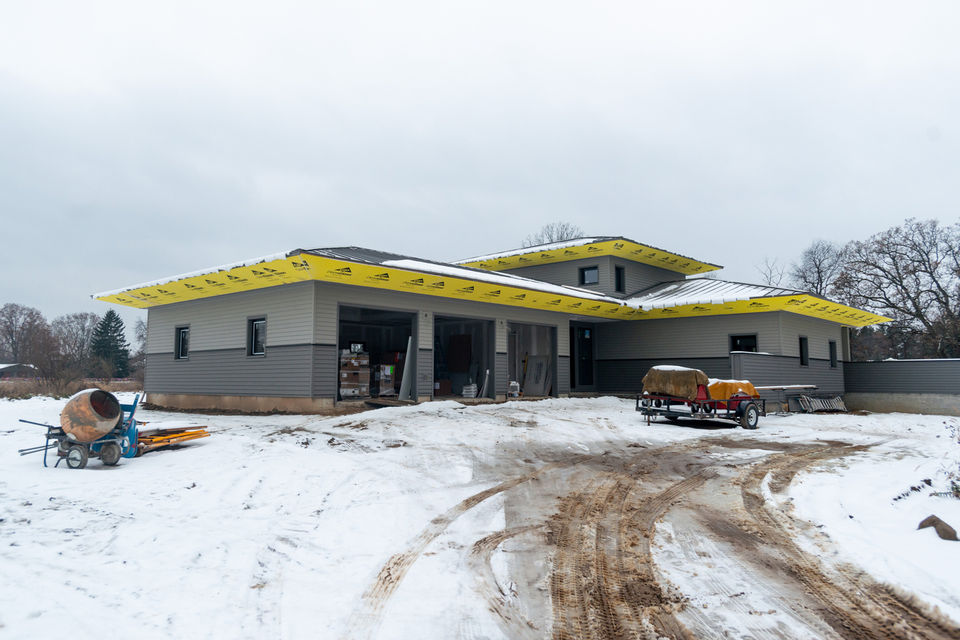 A PHIUS+2015 compliant home that uses 80 to 90 percent less energy than a conventional house is located in Webster Township Township on Nov. 16, 2018. (Jacob Hamilton | MLive)

WEBSTER TWP., MI – Everything about the house on Boyden Drive northwest of Ann Arbor is designed to be energy efficient.

The house is so meticulously sealed off from the outside elements that it doesn’t require a conventional furnace. Occupants’ body heat, heat from appliances running and small heat pumps are sufficient to maintain a comfortable temperature in the house, even through a Michigan winter.

This is the first house in Michigan to earn Passive House Institute U.S.+2015 certification, which means it’s conceived, designed, sited and constructed to use 80 percent to 90 percent less energy than a conventionally built home. 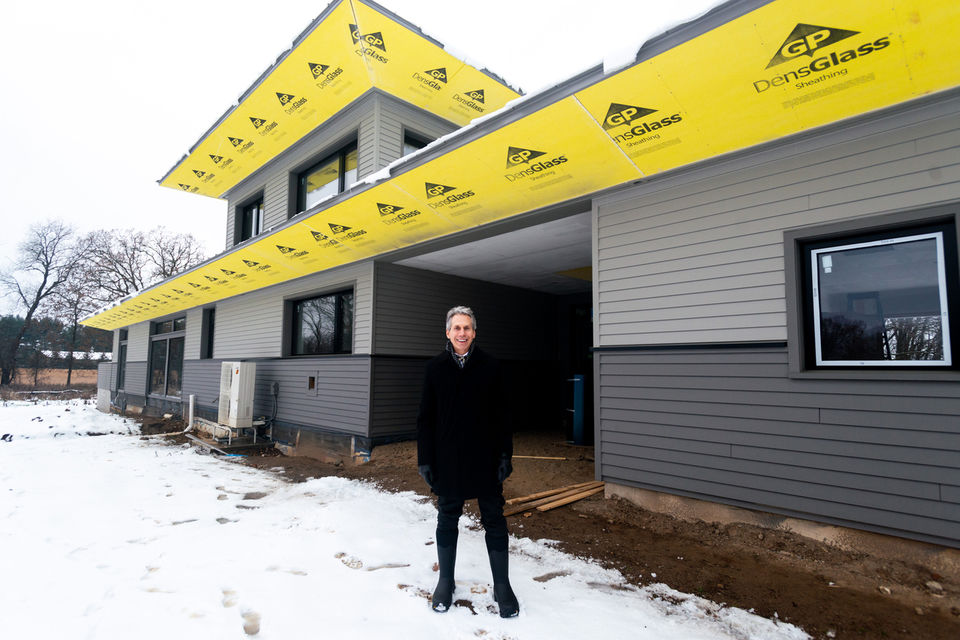 The public will have a chance to tour the three-bedroom, three-bathroom house on Dec. 1, before the owners move in. Ninety-minute tours will run from 9 a.m. to 4:30 p.m. Admission is free, and advance registration online is required.

Here’s a look at the technology and design that makes a Passive House so energy efficient. 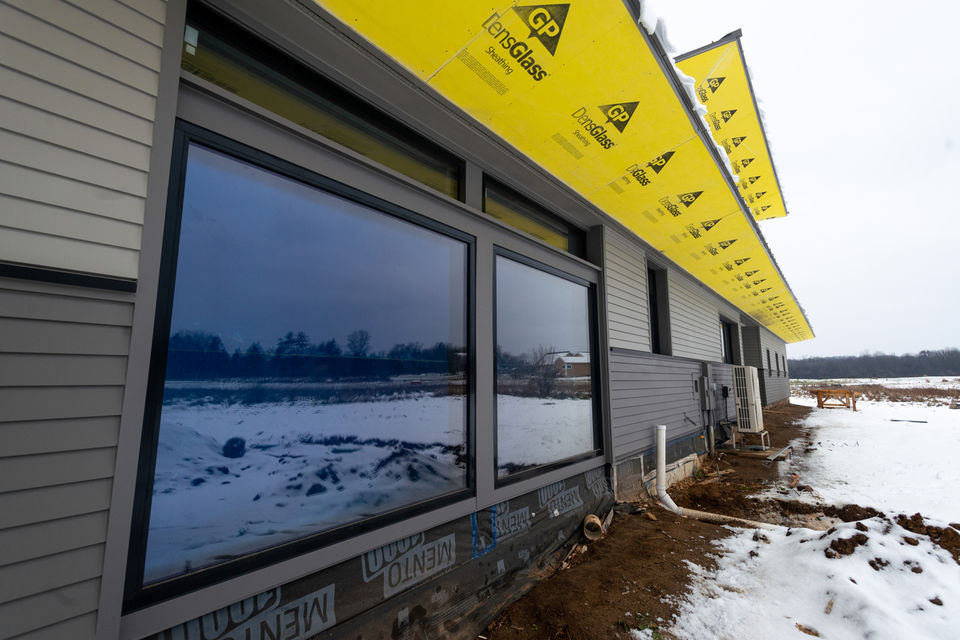 The house on Boyden Drive runs entirely on electricity and will be a zero net energy house, meaning the amount of energy used annually will be equal to the amount of renewable energy generated on site.

To maximize its solar energy potential, the house is situated to catch a lot of sun on its south-facing wall.

What looks like windows from the exterior are actually part of a trombe wall, which captures heat from the sun and slowly releases it into the house through an eight-inch concrete wall behind the pane of glass.

The interior wall gets up to 100 degrees once the heat captured eventually makes its way through the concrete, Klement said. 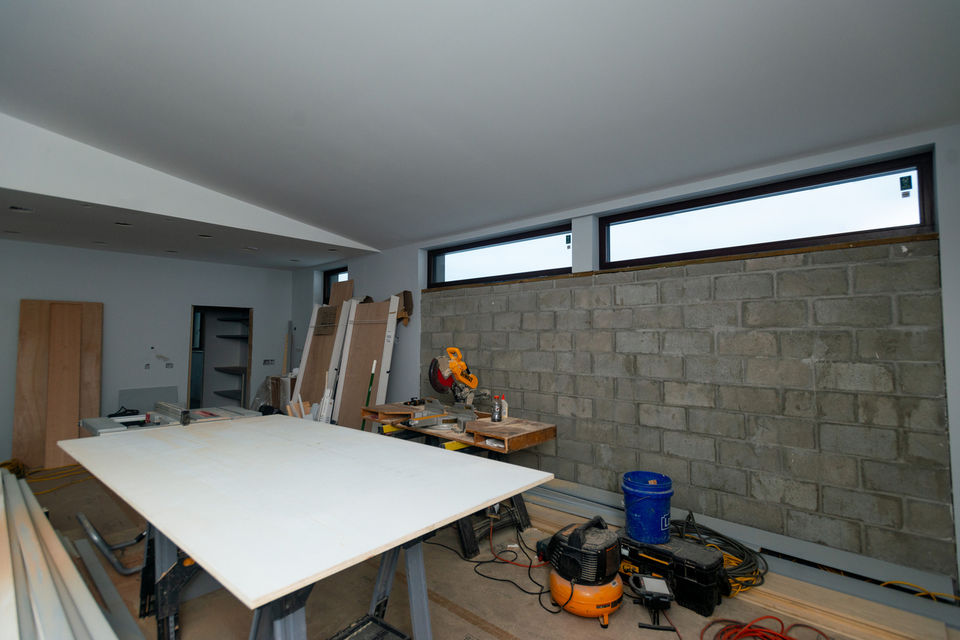 The concrete side of the trombe wall is visible in the great room. 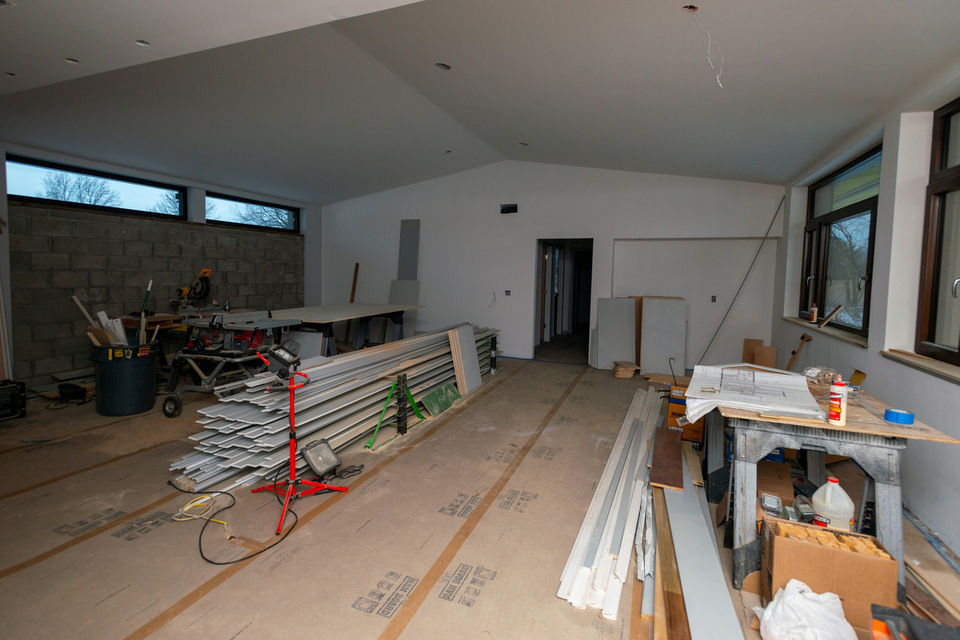 The great room will offer an open floor plan for the kitchen, dining area and main living space. 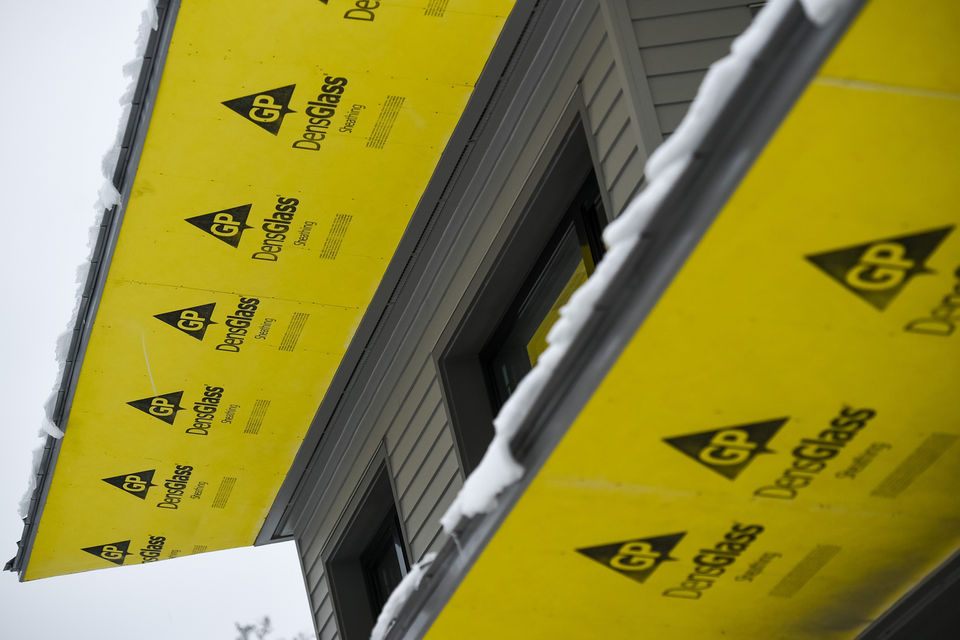 The angle of the overhangs coming off the roof line of the two-story house is intended to block the sun when it’s high in the sky in the summer while still letting in sunlight in the winter when the sun is lower in the sky. 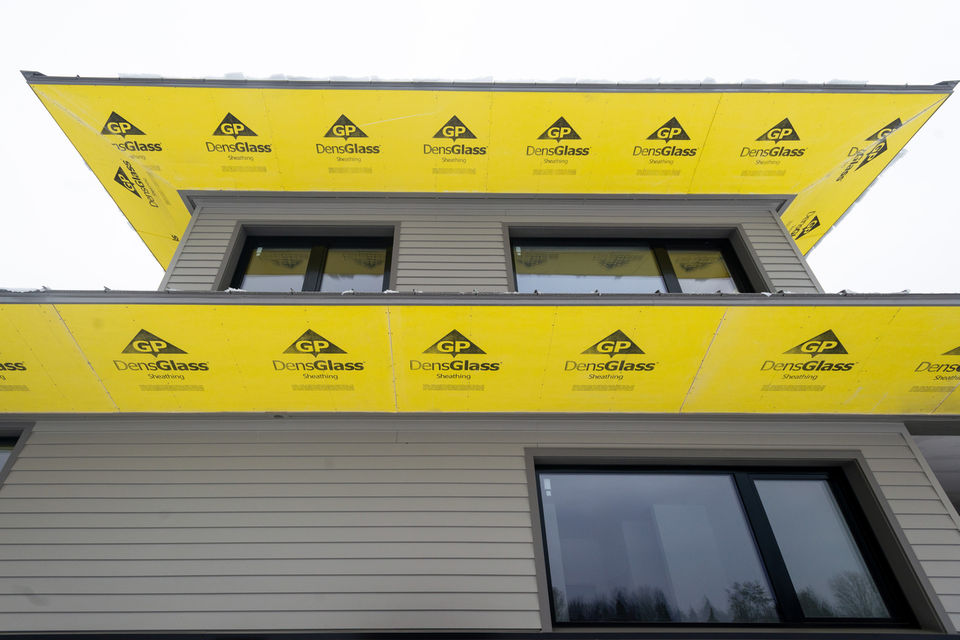 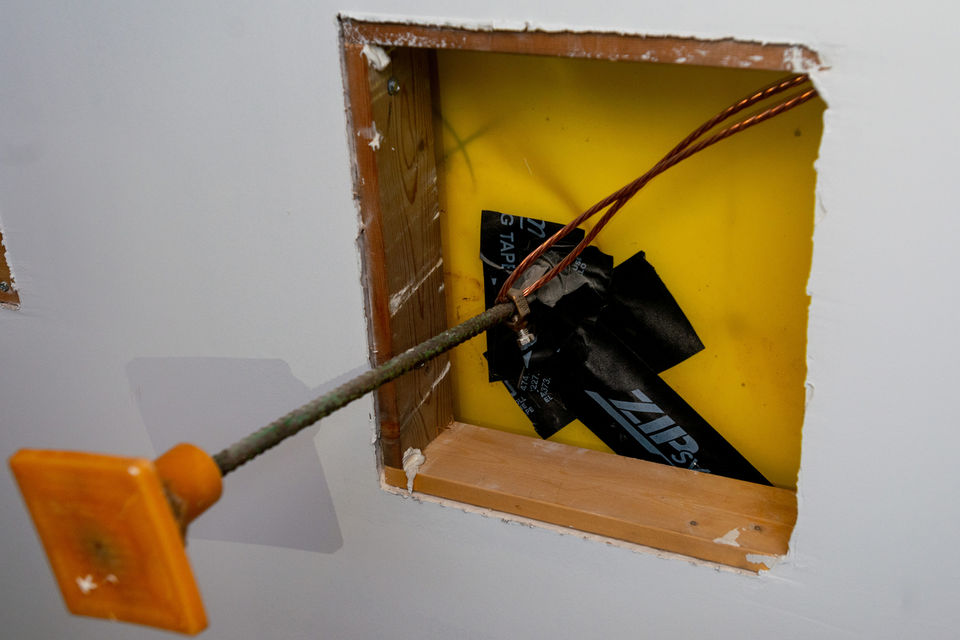 A hole in the basement wall shows the insulation that stretches from under the foundation of the house, up the walls and over the roof.

The home tour will include using an infrared camera to show that heat does not escape through certain parts of the house thanks to thermal bridge free construction. 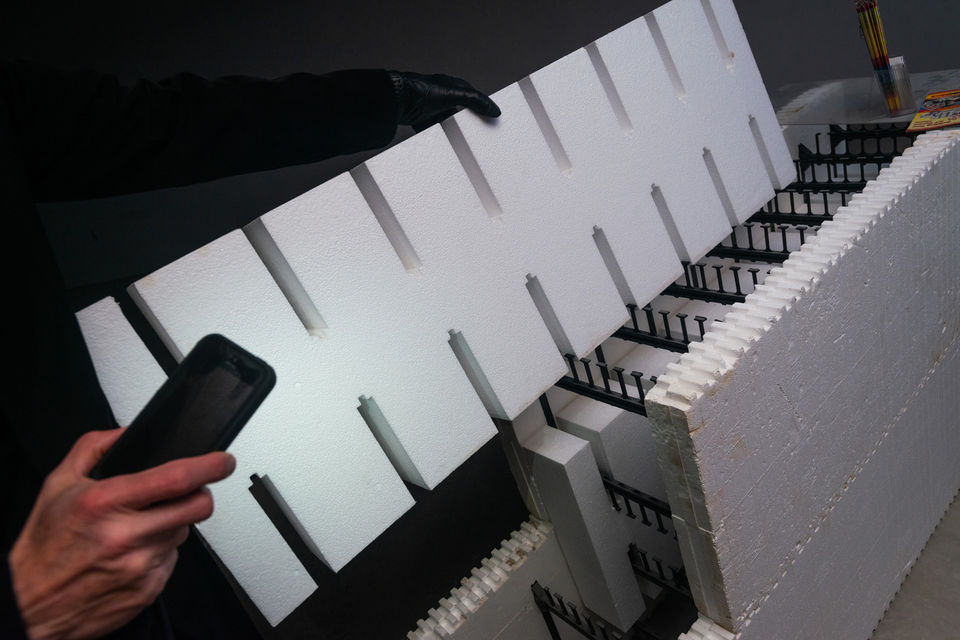 Klement shows the type of insulation in the walls of the foundation of the house. 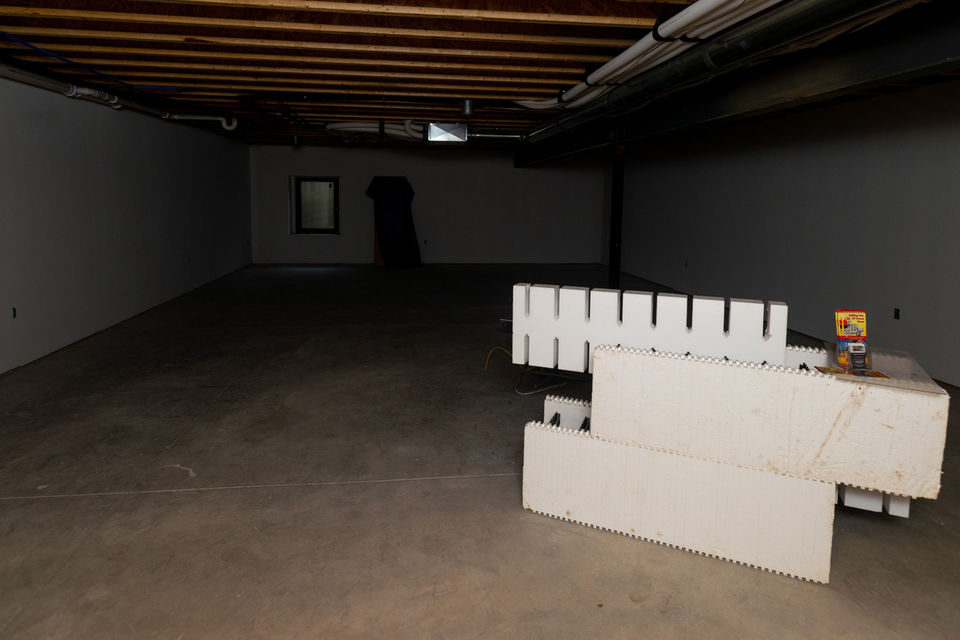 The basement will remain partially finished, with the exposed beams and duct work in the ceiling. 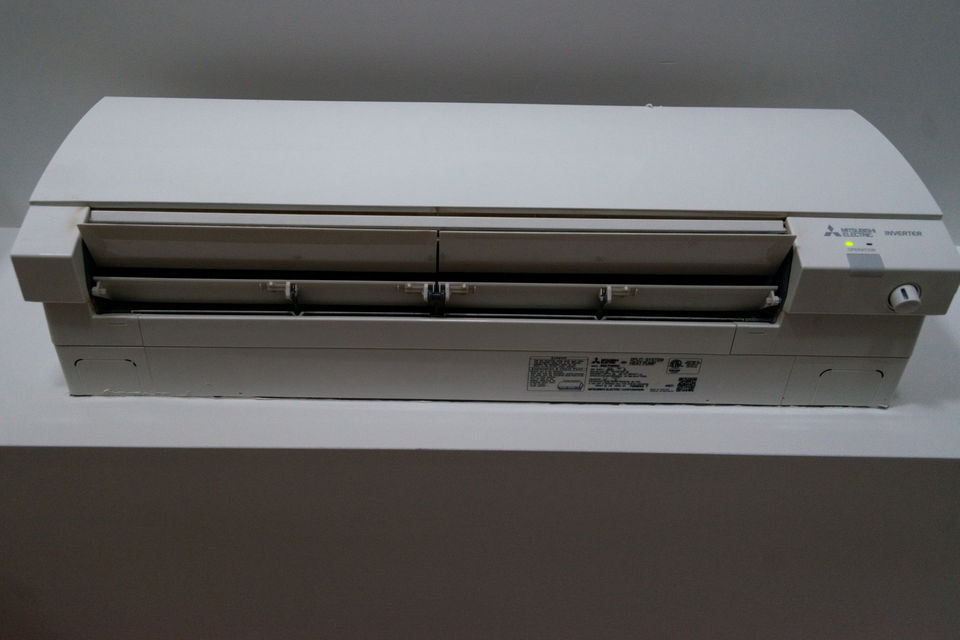 Because the house is so well sealed, a conventional furnace is not necessary to heat the space. Instead four of these mini-split heat pumps provide micro amounts of heat, which couple with occupants’ body heat to keep the house a comfortable temperature. 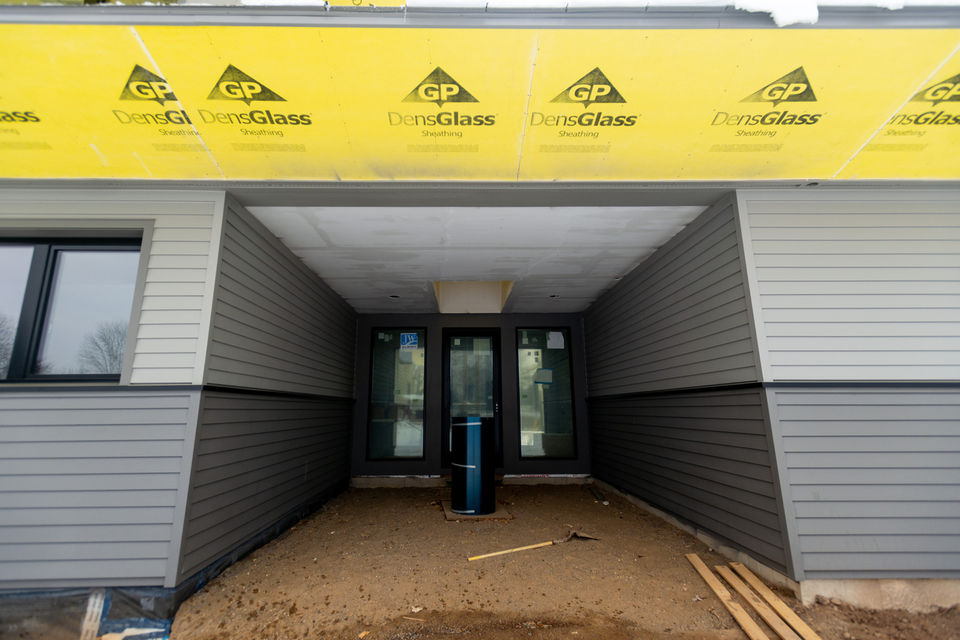 In a conventional house, cold air can enter through gaps in doors or windows and heat ends up getting forced upward and out through the roof.

“A key energy loser in our homes is the leakiness of it,” Klement said. “We call it convective energy loss, that’s wholesale energy moving … in or out of your house. That can account for 35 percent of your energy loss.”

In this Passive House, walls are 18 to 20 inches thick and doors and windows seal tightly to avoid lost energy. 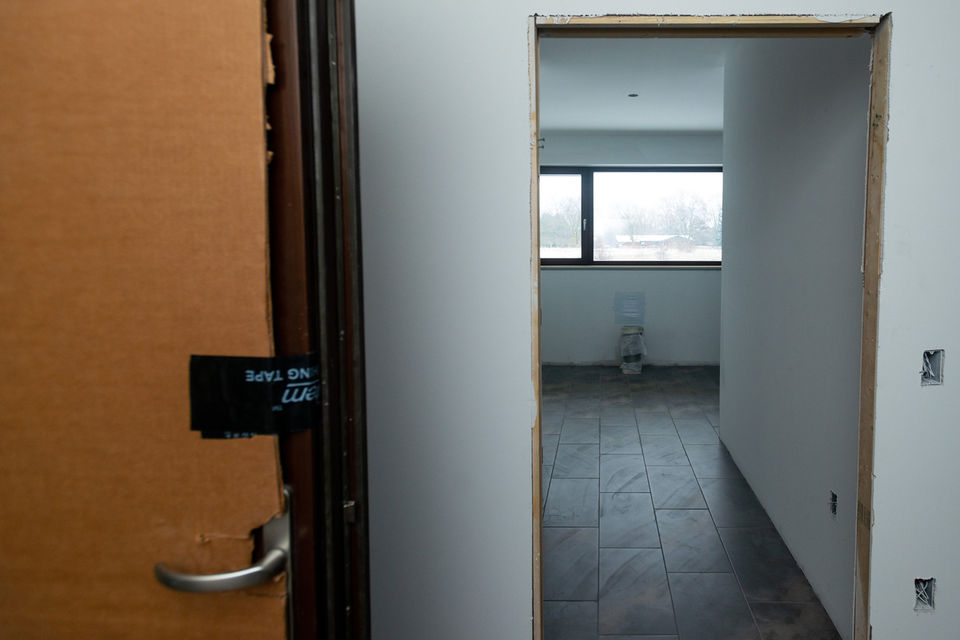 A mudroom and laundry room open off the entry way. (Jacob Hamilton | MLive)

The construction process will take about 10 months by the time it’s completed.

It costs 15 to 20 percent more to build a Passive House than a conventional house, Klement said, but savings on energy costs over the life of the house make up for that.

“We’re paying more to reduce the amount of energy, and then we can pay less for our mechanical systems and our energy cost,” Klement said. “It’s kind of like pay me now or pay me later. I pay now, and I get a healthier, more durable, energy efficient home.” 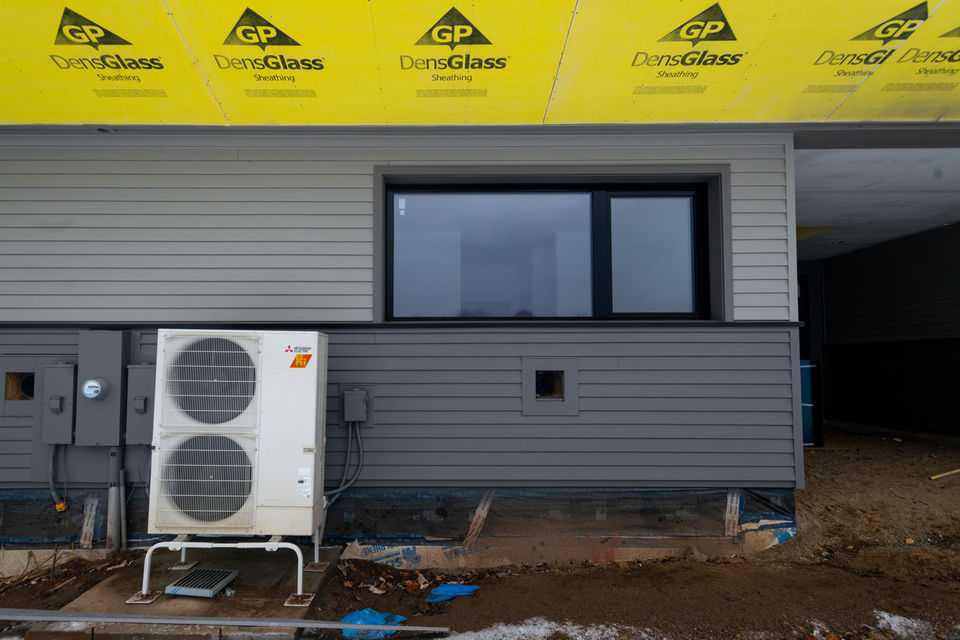 View of the ventilation system from the exterior of the house on Nov. 16, 2018. (Jacob Hamilton | MLive)
Balanced ventilation

Because the house is so well sealed from the outside elements, a good ventilation system is necessary to bring in fresh air and cycle out stale air.

It’s important that very little energy is lost in the transfer of the air, Klement said.

“These two air streams will cross one another through this energy recovery ventilator, and we’re able to take up to 85 to 90 percent of the energy off the outgoing air stream and deposit it on the incoming air stream,” he said. 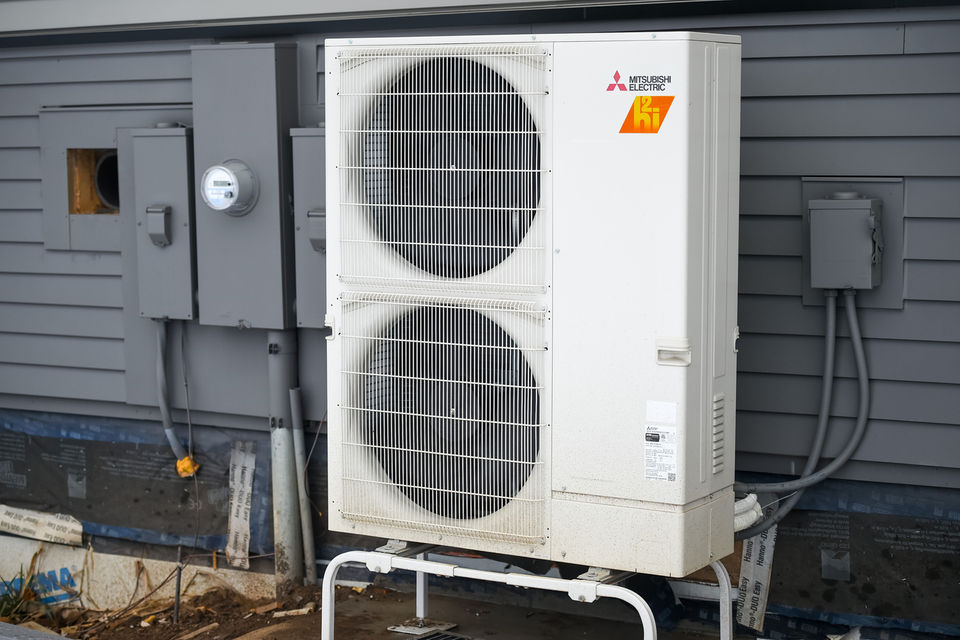 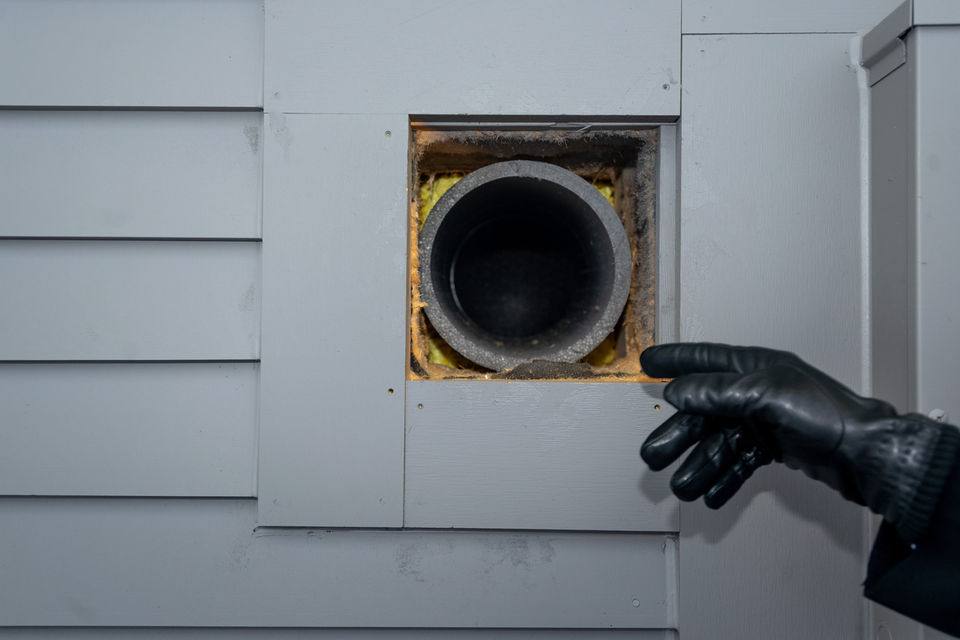 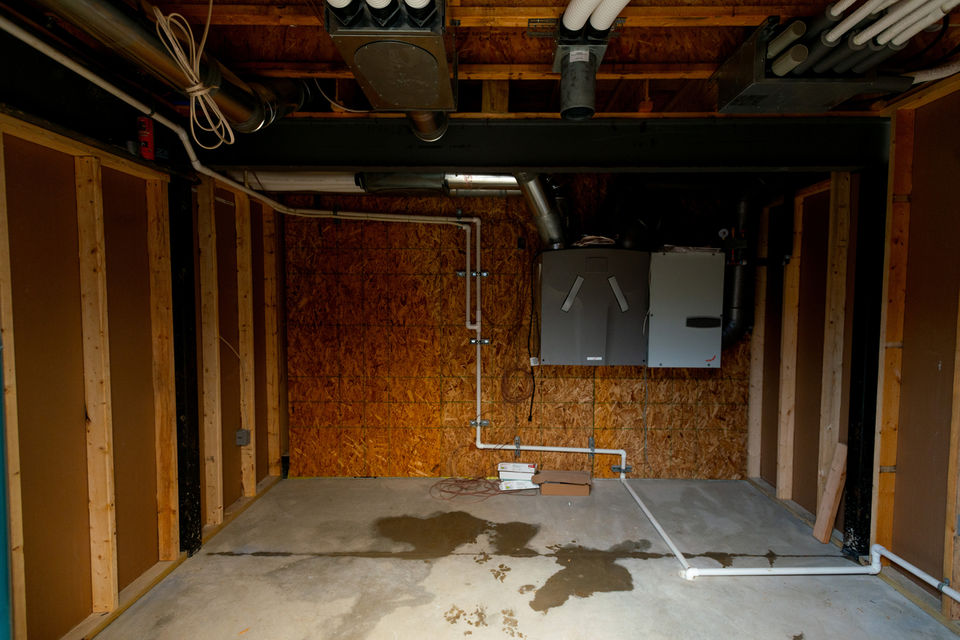 The energy recovery ventilation system – which Klement called the “lungs of the house” – is housed in the basement of the house. Tubes carry the air to different parts of the house. 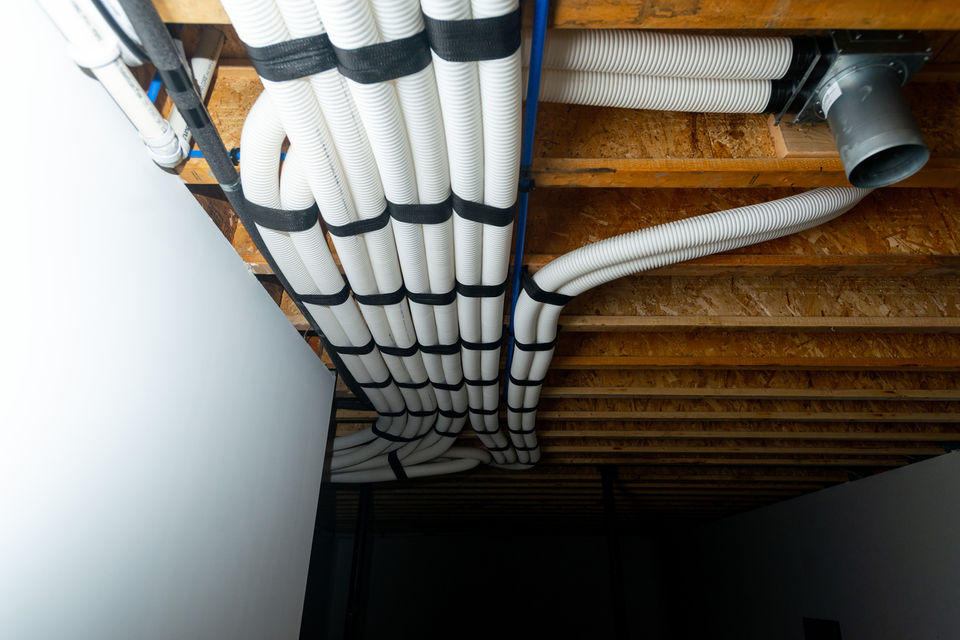 People find living in a Passive Houses to be extremely comfortable, Klement said, due to the even temperature, high air quality and quiet that comes with the air-tight construction. 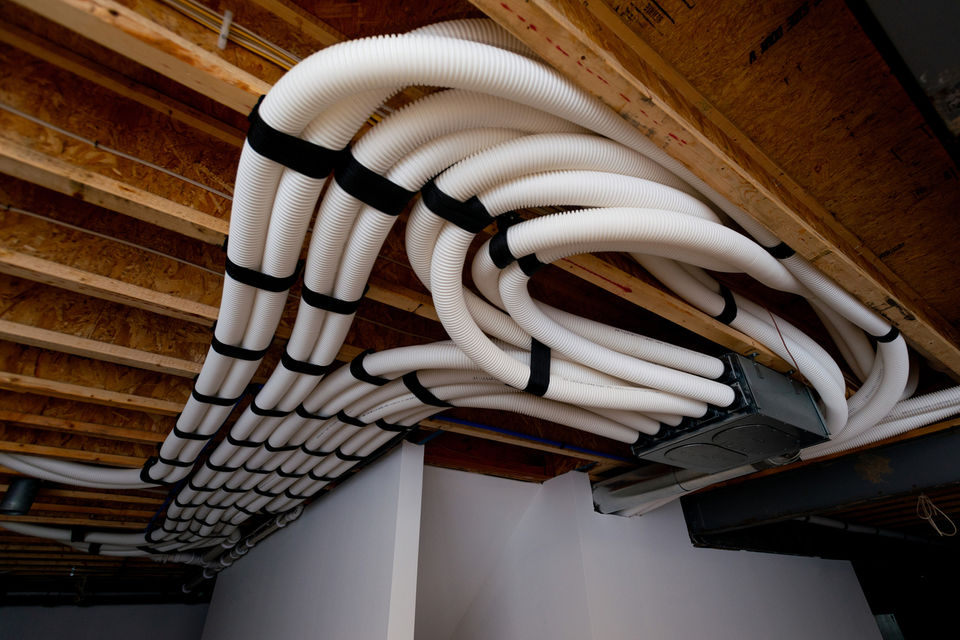 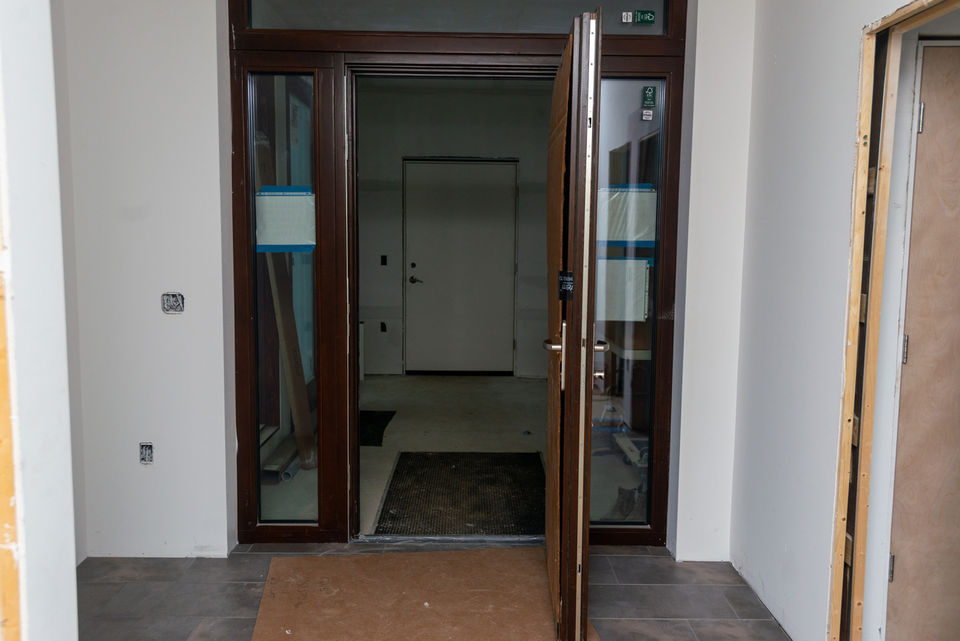 A heavy door separates the unheated entry way that connects to the three-car garage and the rest of the house. (Jacob Hamilton | MLive)
High-performance doors and windows

High-performance doors and windows maintain the energy efficiency of the continuous insulation and air-tight construction. 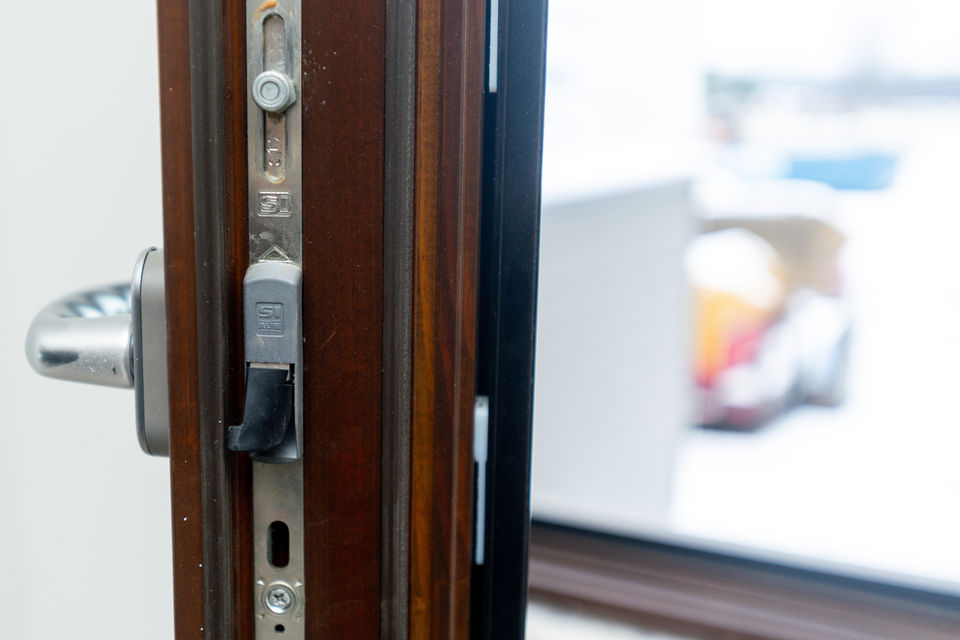 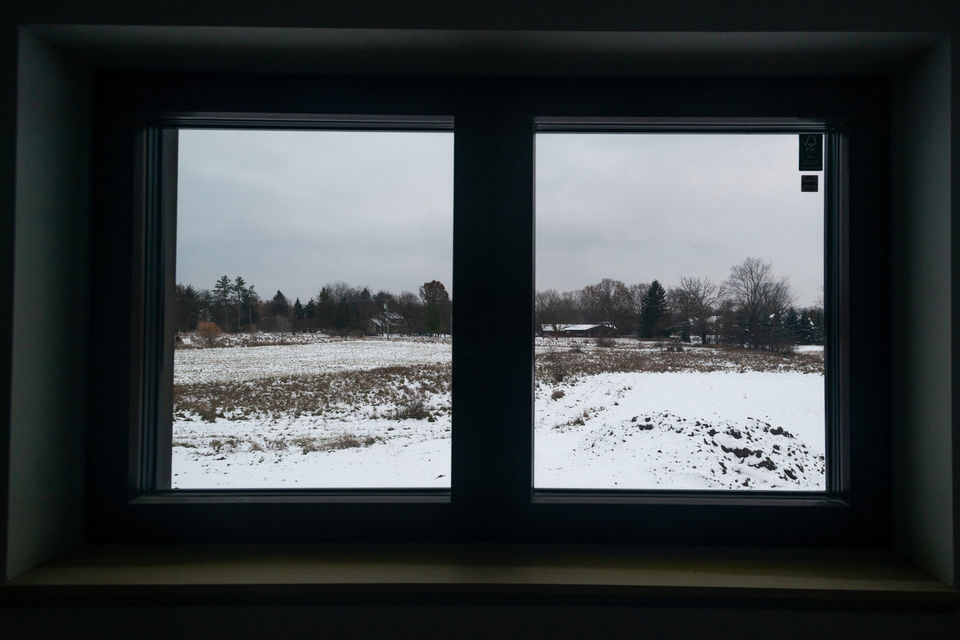 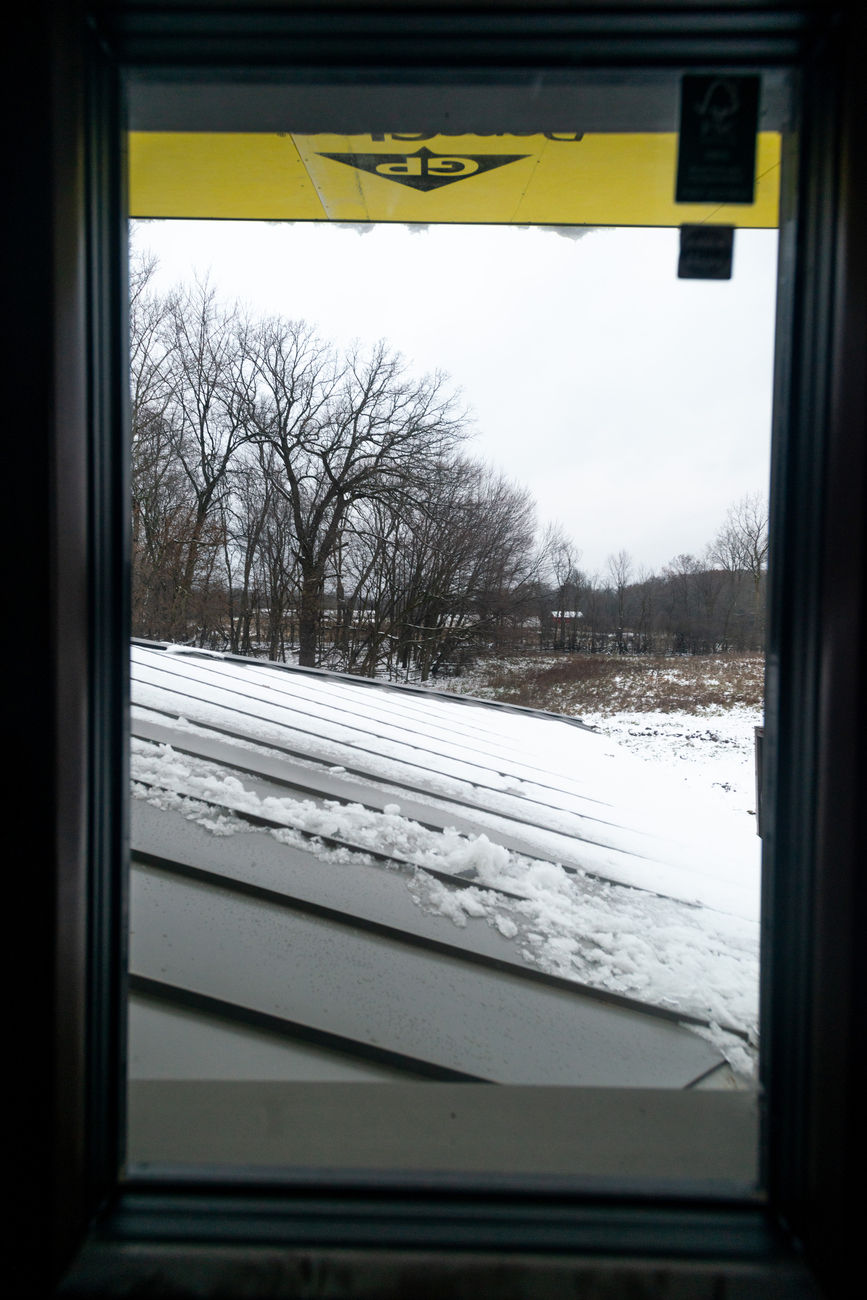 View looking over the roof from a second-story window. (Jacob Hamilton | MLive) 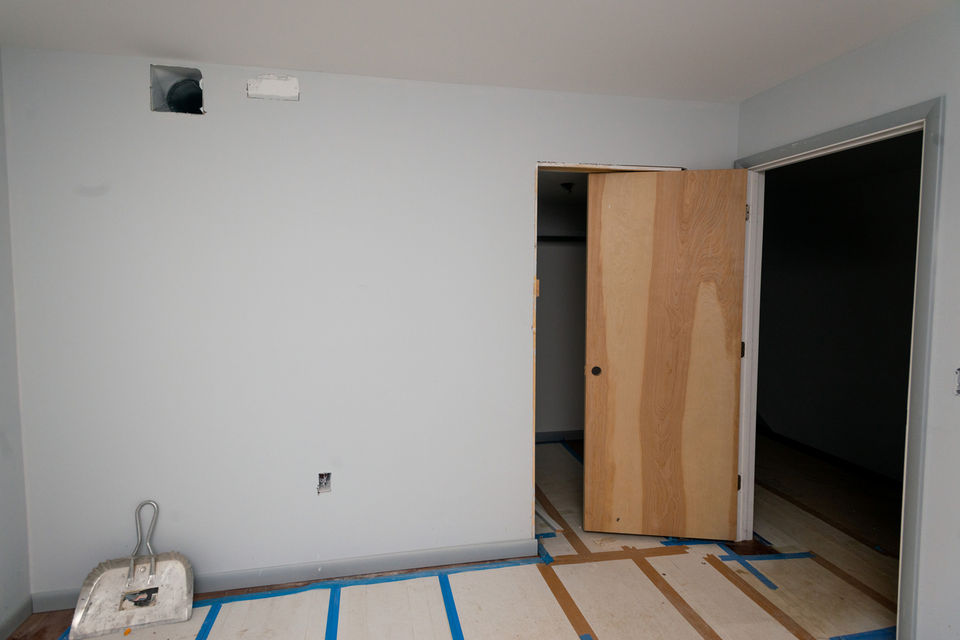 One of the guest bedrooms. (Jacob Hamilton | MLive) 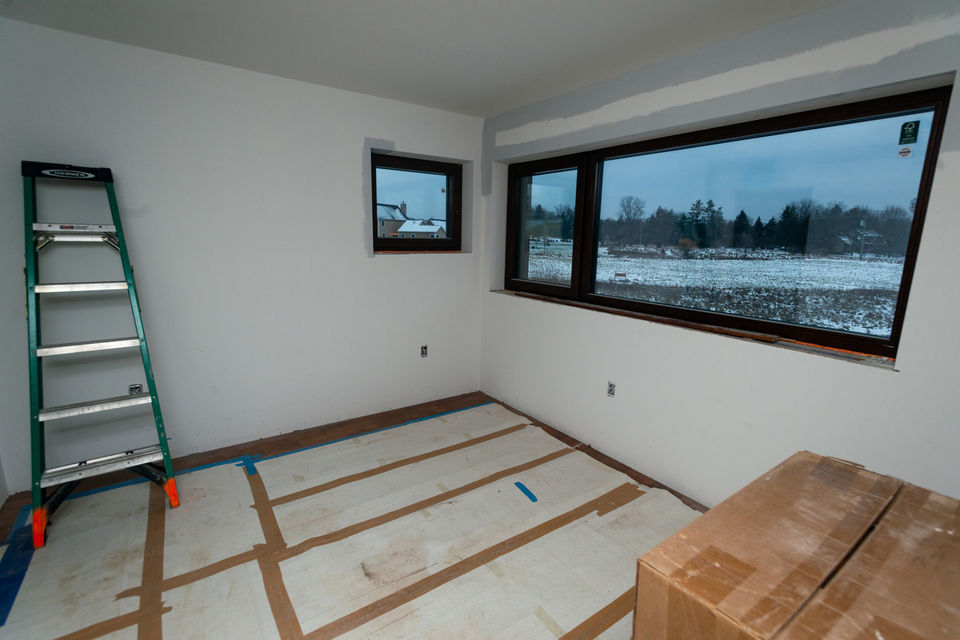 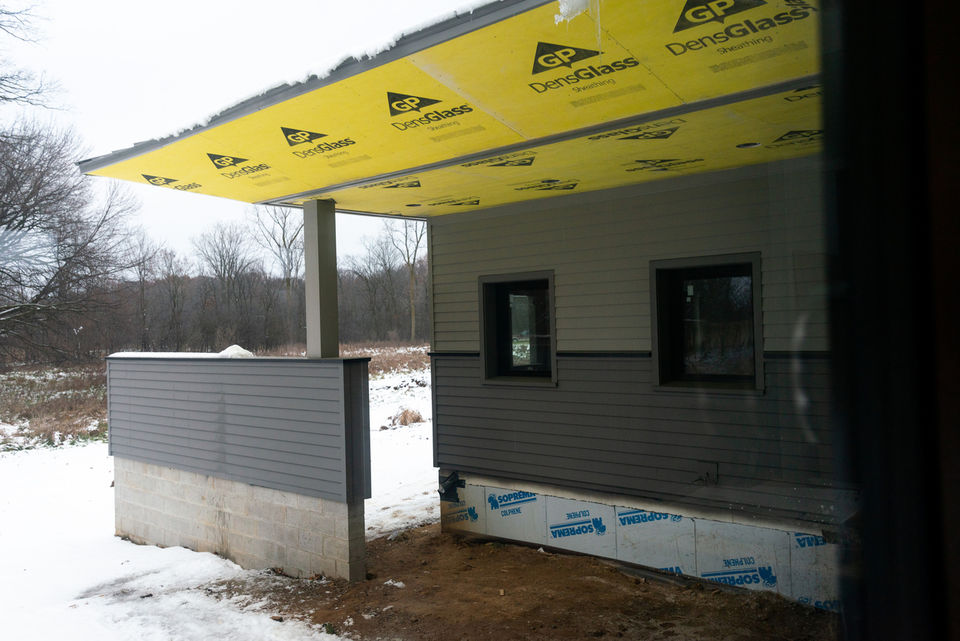 North-facing windows offer views of the nearby woods and look over a space that will be a patio that opens off the great room.