Red Sky Stage is growing!  We have hosted a strings jam session that is overflowing with participant, talent and folks stopping by to listen.  We have staged a variety show,  presented quite a few concerts, magic shows and and stand-up comedy nights. 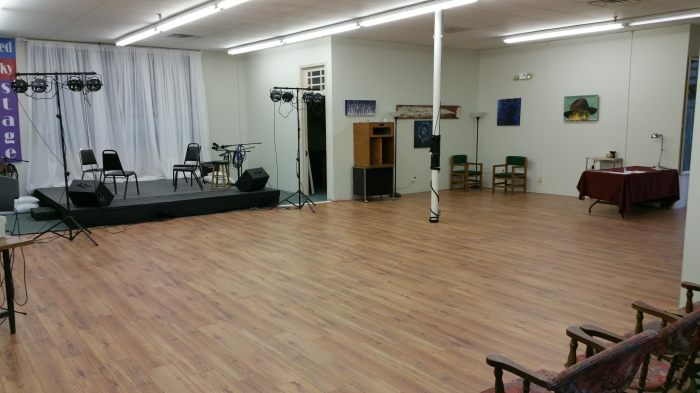 In March 2015 we installed a brand new one thousand square foot dance floor so fans of the Up North Big Band and many other folks now have a place to dance   We are looking for lots of great new things to do on the new floor.  Meanwhile, it is very pretty and some people say it has even improved our sound.

We have hosted a play, an Earth Day celebration and several benefit concerts.  And we have improved our stage and added a vintage acoustic upright grand piano and a Hammond M-3 organ. We still have much more to come in the near future ( jazz concerts, chamber music, etc.) as we create an informal, coffee house style venue for the performing arts right here in beautiful Downtown Petoskey.

Red Sky Stage is also available for rental for meetings, presentations, conferences, birthday parties and anything else that is compatible with our very flexible and convenient space in Downtown Petoskey.  Call for details and to make arrangements.

We invite you to keep track of our progress here as well as on Facebook, Twitter and our Blog, Northern Michigan Art (which covers both the performing and the visual arts).  Better yet, come see us at 445 E Mitchell St in Downtown Petoskey’s historic Gaslight District. 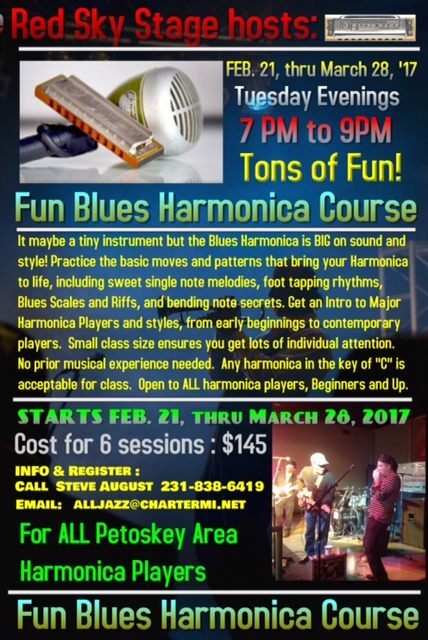 We now offer online purchase of tickets to our events thru

This is a local Northern Michigan ticket service based in Traverse City.   Click HERE for details.

RED SKY STAGE RADIO IS ON THE “AIR” 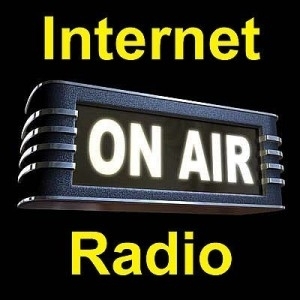 News, arts and event from and about Petoskey!

The New, Improved Red Sky Stage Radio is On The “Air”

The excitement and anticipation has been building for a few months and the time is finally here!  On Monday, February 1,we officially launched Greater Metropolitan Petoskey’s own community arts, news and events Internet radio station.   We feature a live morning talk show, regular topical features by interesting people doing wonderful and creative things right here in Petoskey and lots of music by local Northern Michigan artists and others from around the country who have performed at Red Sky Stage.

Best of all, we broadcast, er, webcast, from the front windows of  RedSky Stage right on Mitchell Street in the middle of Downtown Petoskey’s Gaslight District.  And it is easy to find and listen to on your computer, laptop or smartphone.

When we started Red Sky Stage, one of the first things we did was create an  Internet radio station focused on Greater Metropolitan Petoskey.  We had a lot of fun with it but our engineering technical guru, Jason, decided to leave the pristine shores of Little Traverse Bay and follow his fortune to the tar sands fields of North Dakota.

After waiting for him to return so we could reopen the station, we finally realized that that was not going to happen any time soon and we really missed that radio station.  So we gritted our teeth, rolled up our sleeves and decided that a few reasonably intelligent folks with a rudimentary misunderstanding of the Internet ought to be able to create an even better community radio station for Greater Metropolitan Petoskey.

We found some nice, simple software that the developers claimed anybody could use to start a radio station and begin Internet operations in only a few hours.  We figured if anybody could do it in a few hours, we could probably do it in a few months so we gave it a try.  After a week or so of  trying to open the box, we thought we might just be able to pull it off.

We do need help to make this a real community effort so if you have ever wanted to be a part of a local, community oriented Internet radio station, now is your chance.   Go to the Internet Radio page in this website and check out the list of volunteer opportunities we think we need to fill.  If you want to do any of these things, let us know.  if you have something else you would like to do, we probably need that too.